THE NINTH CIRCLE by Brendan Deneen 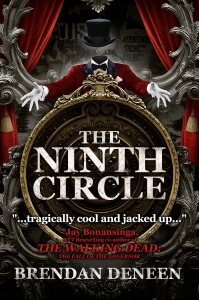 THE NINTH CIRCLE is the debut dark fantasy/horror novel set in a creepy travelling circus written by Brendan Deneen.

About Brendan Deneen
After a successful career in the film industry, Brendan Deneen joined Macmillan Entertainment, where he’s edited a string of popular titles including The Walking Dead novels by Robert Kirkman. Deneen is also the author of several comic book series, including Flash Gordon, Casper the Friendly Ghost, the critically acclaimed Scatterbrain series, as well as the graphic novel Rudolph the Red-Nosed Reindeer: The Island of Misfit Toys. He also has film and TV projects in development at MGM, Legendary Pictures, The Weinstein Company, and others. Deneen was named to the Studio System News “Hottest Book Film Dealmakers to Watch” list, and you can check out his recent interview with MediaBistro here.

Synopsis
Inspired by Dante’s Inferno and drawing on works like The Night Circus by Erin Morgenstern and Geek Love by Katherine Dunn, THE NINTH CIRCLE follows the adventures of Dan, a 16-year-old runaway, as he travels with a circus through nine states. The Ringmaster guides Dan through this magical world, and soon Dan has fallen deeply in love with the circus life…and with the Bearded Lady. But the circus is full of mysteries. Many performers boast strange talents, and one harbors a secret that could destroy the circus forever.

*For review copies or interview opportunities, please contact me at grossman.stephaniem (at) gmail.com*